Life is complicated. Life is really complicated with parents living apart, sharing custody of six kids, one works two jobs while the other is trying hard, but still self-medicating to cope with the stress. Yeah, it is complicated. 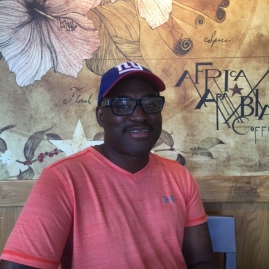 I meet Ibu on his day off.  He rides up on his bike to meet me, eager to share the story of the day his children were removed from their home by the Division of Child Protection and Permanency (DCP&P). That was two and a half years ago.

This is how it all started…a fight between two of the boys, landed one in the ER. A well-meaning aunt took the boy from the ER to another hospital in Philadelphia, leaving a discord between the boys’ mother and her well-meaning sister and an open door for a DCP&P investigation.

When DCP&P showed up at the home, mom was, understandably frightened. Strangers were coming into her home to investigate the welfare of her children and potentially their removal – that would frighten and anger anyone and perhaps make you not very cooperative. Which was the case for Ibu’s ex-wife. Once the investigation was complete, all of the children were removed from her care. Another aunt took in Ibu’s two girls, the two older children went to live with their biological father and a foster family takes in Ibu’s two boys.

DCP&P, CASA and the courts, work hard to keep families together, that is always the first choice whenever possible. Cooperation from all parties, especially the parents, is the key to ensuring reunification. Ibu understood this immediately and made sure he did everything necessary to bring his kids back home. Ibu’s ex-wife took a little longer to understand the process and the importance of her cooperation, but eventually she did, entering a recovery program for her drug addiction.

Still, challenges existed that needed solutions. Childcare was a big obstacle, Ibu had to work, but who would watch the boys? Luckily, DCP&P helped secure affordable childcare. Ibu’s two girls were unhappy living at their aunt’s home so DCP&P granted permission to stay with Ibu’s girlfriend – a week before a court hearing. The two younger boys had trouble in school, so CASA Merv helped get them into an aftercare programs. The children’s mom continued to struggle with her addiction so CASA Merv helped her get the services she needed that would bring her kids back home.  Even transportation was an issue – Ibu and his ex-wife had to take two to three busses every week to visit their boys in their foster home.

The process was slow and difficult, but it was working and support came from all corners.

CASA Merv said, “The first time I met Ibu, he stood up in court, and clearly stated his intentions to reunite his family. I was so impressed with Ibu. We became friends.  Ibu did everything.”

In time, mom became more and more cooperative. She too, began to do what needed to reunite her family.  One by one, the children returned to their parents’ homes. Ibu has his two boys.  The others are with their mom.

Ibu finished our talk with on a positive note, “In the end, good came out. My kids never had Godparents. Through my visits with my kids while in their foster home, I came to know this wonderful couple. During a phone call, after the boys returned home, the foster parents asked if they could maintain their relationship with my boys. They asked if they could call the boys once a week and sleep over once a month to see the friends that they had met in the neighborhood. They also asked if they could be the boys Godparents.” Ibu responded to this heartwarming request with, “I’ll check with their mom.”  The kids now have Godparents and monthly sleepovers with their new friends.

Ibu said his relationship with CASA Merv continues with calls once a month to check in to say, “If you need anything at all, just ask.” Ibu said, “CASA Merv’s role was instrumental in getting my kids back home. He cared, was always there, and gave us the resources we needed.”

CASA Merv and DCP&P told the judge that this foster family has fostered many children but Ibu’s children, “are the best kids we’ve ever had, they were kind and respectful and well mannered.” As a parent, those are the best words that you can ever hear, especially with the challenges that this family faced.

We all know that life is complicated, but helping each other over the bumps in the road makes our journey together a little lighter.